I am a Mormon, digging up Catholic records, for an Iglesia ni Cristo leader. My hope is that this research will draw hearts closer together, despite religious differences.

This year marks the centennial of the founding of the Iglesia ni Cristo (Church of Christ). This home-grown religion has flourished from its humble beginnings in Santa Ana, Manila, to about 5,545 congregations worldwide in the span of a hundred years. Its founder and first Executive Minister Felix Y. Manalo is revered by the members as “the last messenger of God.” For such a prominent 20th-century figure, it is surprising that not much is known about the lineage that produced the great “Ka Felix”. This post summarizes my attempt on searching for Manalo’s ancestry, going further back in time than where most writings on his life start off from. I used mostly online resources, and microfilmed records provided by FamilySearch.

Parents
I began in Taguig, his birthplace. Felix was said to be born on May 10, 1886, in a sitio called Calzada in Tipas, Taguig. All accounts agree that he was born Felix Manalo Ysagun, son of Mariano Ysagun and Bonifacia Manalo. He carried the last name Manalo later on at about after the death of his beloved mother. A lot of years are missing in the church records of the Parish of St. Anne. They were probably damaged at the height of World War 2. The whole period of 1880 to June of 1886 which should contain his baptismal record, is missing from the registry. My assumption is that he was christened on May 18, which is the feast day of St. Felix, his most-likely namesake. It was a common practice in the early days (even towards the mid-1900s) to name babies after saints whose feast dates fall on the day of the child’s birth or christening. So, with the impossibility of verifying his parentage based on records, the next best option was to trace his only full sibling on record – Praxedes. This younger sister is said to be a year younger than Felix. I started searching from March of 1887 (10 months after Felix’s birth), and found Praxedes Ysagun’s baptismal record: 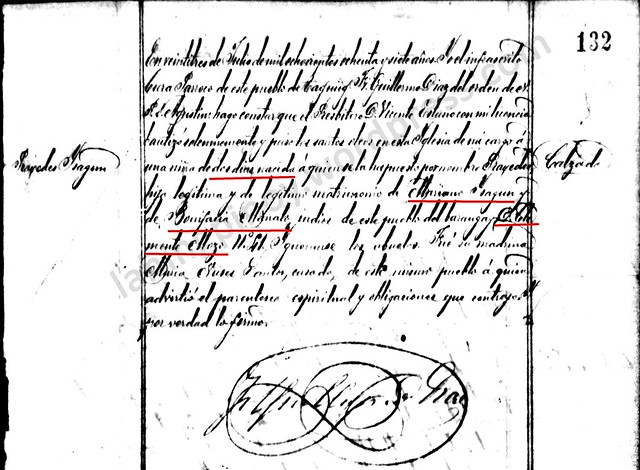 Herein are recorded the names of Mariano Ysagun and Bonifacia Manalo as parents. Note that the cabeza de baranggay (equivalent of the modern-day Baranggay Captain) at this time was Clemente Mozo, the same Clemente whom Bonifacia married after Mariano’s death. Note also that Praxedes was christened on July 23, and was dos dias nacida or two days old, meaning she was born on Jul 21, the feast day of St. Praxedes.

Grandparents
Typically, the grandparents are named in catholic baptismal records. This is not the case with Praxedes’ baptismal register though. It says ignoranse los abuelos which means “grandparents unknown.” I have not come across accounts that give the parents of Mariano and Bonifacia either, so I took this as a research challenge and opportunity to contribute to written history. I then started searching for Mariano and Bonifacia’s marriage record. Felix is said to be their eldest, and if he was born in 1886, his parents would most likely have been wed the year before (1885). Unfortunately, the marriage registers are also missing entries between May 1883 to Feb 1900. It is known that Bonifacia married a certain Clemente Mozo sometime after Mariano’s death, but again, we have no record of this marriage because of the missing years in the registers. Many blogs erroneously put the death of Mariano to be around the time of the Philippine Revolution (1896), and suggest that Mariano could be a Katipunero killed in battle. Fortuitously, my friend Todd Sales, who happened to be also researching Manalo’s genealogy, showed me a page from the padrones or taxation record of Taguig showing Clemente and Bonifacia already together in 1890. 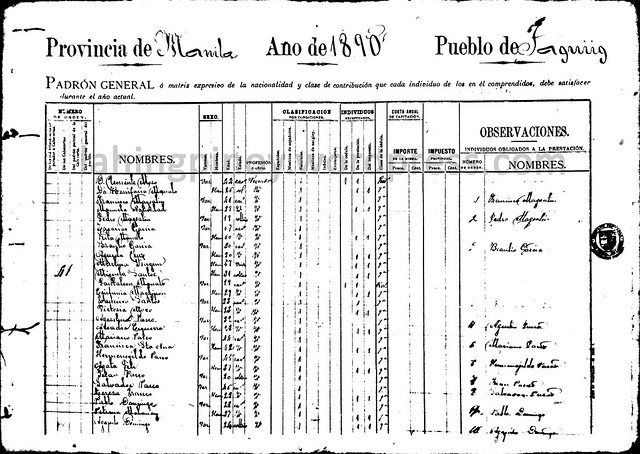 “Felix’s father died when he was only two or three years of age.”

This makes Kavanagh’s statement the more accurate account, as it is supported by this taxation record. With both of Bonifacia’s marriage records missing, and no abuelos recorded in her daughter Praxedes’ baptismal record, I went back to check whether I could chance on finding Mariano’s and Bonifacia’s birth records. Logically, one would search around 20 years back from the eldest child’s birthdate for the parents’ birth accounts. Sadly, the books are also missing the baptismal records of the 1860s. This is another major roadblock. At this point, I read through accounts again and found out that Bonifacia reportedly had five children with Don Clemente Mozo. So I commenced the search for baptismal records from May 1888 (10 months after Prexedes’ birth), hoping that one of the Mozo children’s files will give Bonifacia’s parents. With a quick scan through the microfilm number 1209189, I was able to find two of them: Baldomero (b. 1900) and Simeon (b. 1902). 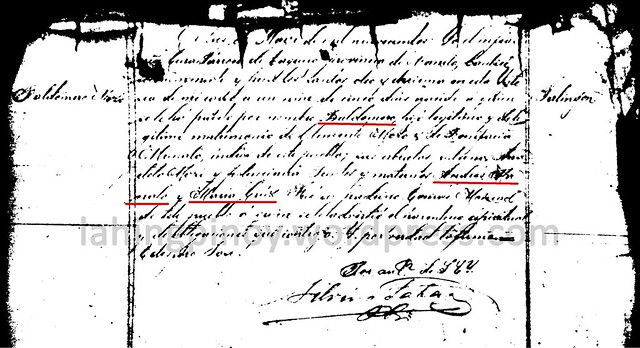 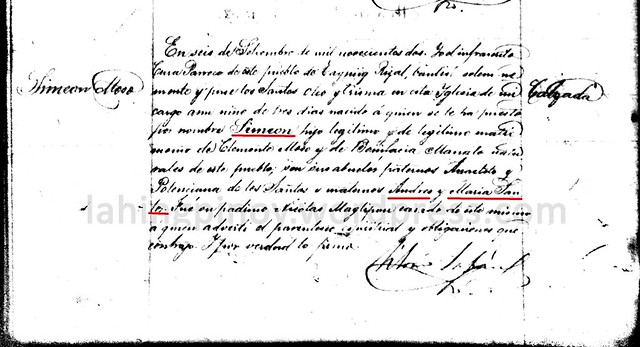 Kavanagh, who is the only source on my list to have checked the actual records in Taguig, said that Baldomero’s record is missing from the registry. This find proves otherwise. The two records provides an interesting discrepancy. Baldomero’s baptismal record indicates the abuelos maternos (maternal grandparents) as Andres Manalo and Maria Cruz, while Simeon’s gives Maria Santos as the grand mother’s name. The other siblings’ files would be good to check regarding this matter, and I’ll look for them at a later time. Regardless of that, this is one additional generation to Felix Manalo’s existing family tree.

Now going back to Mariano Ysagun. I could not find his birth record, and there is no mention of his parents in Praxedes’ baptismal register. His registro de matrimonio with Bonifacia is also nowhere to be found. This is where luck struck and with the following two records I found, I propose two hypotheses:

Marriage record of Mariano Ysagun to Jacoba Paseo (or Pasco), 1861

Here are a couple of points to consider: First is the age gap. If indeed this Mariano is the same as Bonifacia’s husband, he would have been in his early 40s in 1885 and Bonifacia was about 21. BUT, remember that Bonifacia married Clemente who was 18 years her senior. The age gap then should be a non-issue. Second: two Mariano Ysagun of Baranggay Calzada? Baranggays in those days were not as populated as they are now. Brgy. Calzada, where most of the Ysaguns apparently originated, lists around 150 tributarios (tax-payers, 18 years old and above) in the early 1890s. In my opinion, chances are slim that there was another Mariano Ysagun in Baranggay Calzada between 1861 and 1887. If this is so, this Mariano could be Mariano Sr., but that cannot be proven with the data found so far. This record indicates that Mariano is the son of Salvador Ysagun and Teresa Villanueva.

Hypothesis #2: The same Mariano Ysagun had an earlier marriage to Magdalena Maglipon, and fathered a child with her named Pedro in 1880.

This is again from the same hamlet along the coast of Laguna de Bay. Mariano may have been widowed, and married a certain Magdalena who gave birth to Pedro Ysagun on February 22, 1880. This record, however, does not provide any mention of the abuelos. I’ve noticed that rather consistently, the baptismal registers in the 1880s in this parish omit naming the abuelos. Ignoranse los abuelos was all over. A lazy scribe perhaps?

I am continuously working out on this in collaboration with Todd Sales, author of the Filipino Genealogy Project blog. I have added only one generation, but it is great to know that we now can give credit to THE people whose loins produced the great Ka Felix, founder of the Iglesia ni Cristo, of which centennial is celebrated this year. To all my INC friends, happy centennial! To God be the Glory.

12 thoughts on “Tracing the Ancestry of Felix Manalo”

WordPress.com is the best place for your personal blog or business site.